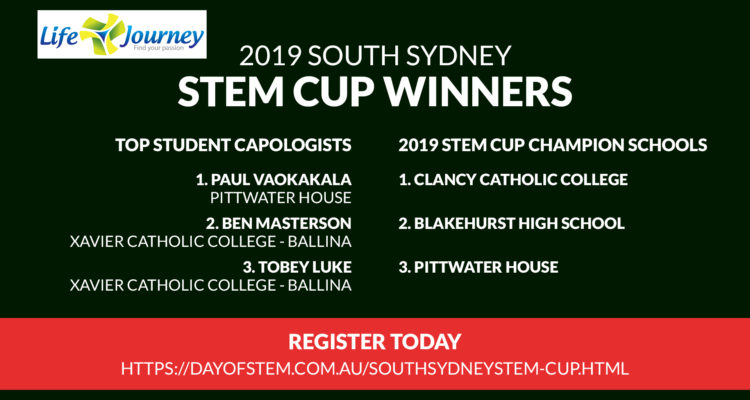 The South Sydney STEM Cup will have a new home this year in West Hoxton, NSW as Clancy Catholic College have taken the top School Prize for the 2019 competition by having the highest number of students complete the program. The runner-up is the inaugural 2018 champion Blakehurst High School, while Pittwater House rounds out the top places coming in third.

Paul from Pittwater House in Collaroy, NSW took first place for the 2018 Student Prize for balancing his team spend under the NRL salary cap and choosing salary figures for the Rabbitohs on his Capologist worksheet. Paul’s worksheet was the closest in the competition to the real figures determined by Rabbitoh’s Capologist and LifeJourney mentor Peter Legg.

Ben and Tobey, two students from Xavier Catholic College in Ballina, NSW placed second and third in the student competition. Paris placed fourth and had the highest individual score from her class at Blakehurst High School.

The top schools and students will be treated to a behind-the-scenes experience next week when the Rabbitohs take on the Bulldogs for Round 22 at ANZ Stadium. Students will meet and have a chat to Capologist Peter Legg in addition to receiving the STEM Cup and related prizes during the presentation at half-time.

The South Sydney STEM Cup is a dynamic national maths challenge based on the real-world career of Rabbitohs Football Club’s Capologist which is part of the Australia Day of STEM initiative. South Sydney STEM Cup is also supported by the Australian Association of Mathematics Teachers (AAMT) and the Mathematics Association of NSW (MANSW). The program is available year-round for schools across Australia, while the opportunity to win prizes falls within a specific time-frame during the season.

The Day of STEM is a national initiative, designed using the LifeJourney™ platform to raise the National IQ for STEM and Cyber Science. The program introduces and inspires all secondary and tertiary education students to pursue STEM careers and build the skills that will open up their future and connect them to the in-demand digital workforce.

Subscribe to the Day Of STEM Newsletter for the latest updates.